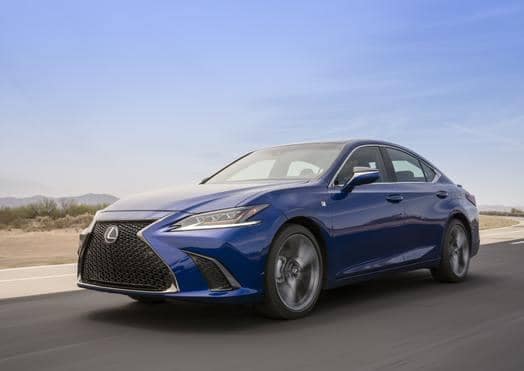 With the Lexus brand comes many adjectives – Luxurious. Sleek. Powerful.

One word especially comes to mind when describing the brand-new 2019 Lexus ES – Bold.

Without a full redesign since 2013, it was time for the ES to get a facelift, as many of its brethren vehicles have recently. Lucky for consumers, this final product will be ready just in time for the 2019 model year.

With a first look toward the car’s front end, wider headlamps have been added including three light clusters instead of the previous two. Body modifications match this move toward the sport end including a lower hoodline, enlarged spindle grille, and vertical hood slats that provide a unique twist when viewing the vehicle head-on.

In the rear, triangular taillights have replaced an outdated build, along with rounded cut lines that keep in line with what is seen up front – aesthetically pleasing yet looking downright “fast”. Essentially, the new 2019 Lexus ES sees added focus on style, while keeping in line with the class-leading performance that the brand is known for (more on that later!).

All told, the new ES is longer (by 2.6 inches), lower (by .2 inches), and wider (by 1.8 inches) than before. It also features a longer wheelbase (2 inches), which reflects newfound performance capabilities and gives the ES the kind of eye-catching appearance that will make owners take a second look as they walk away.

Inside, imagine all of the interior amenities in the old ES, but streamlined to a T. A new display rests snuggly atop the dash, with a touchpad controlling the infotainment screen – this was previously a mouse. Drivers and passengers will also notice a new formation of buttons, gauges, and indicators that simply make things more comfortable for everyone. The interior redesign was an important part of the new ES, and it checks all of the boxes for functionality, and then some

Speaking of performance, all ES 350s are powered by a 3.5-liter V6 that is designed to deliver commanding acceleration along with an invigorating sound (and 302 horsepower, but who’s counting?) In addition to the additional 34 horsepower in the redesign, the ES also boasts a new eight-speed direct shift automatic transmission. Don’t count out the fuel efficiency on the new ES, either. A new fourth-generation Hybrid Drive System delivers a preliminary estimate of 44 mpg.

Take the words of Project Chief Designer Yasuo Kajino, who described the look of the new 2019 Lexus ES as “provocative elegance”.

“The ES has always been an elegant luxury sedan,” Kajino said. “For this generation, we have added daring design elements that challenge the traditional expectations of buyers.”

If you’re looking for a new addition to your fleet that will turn heads, look no further than the 2019 Lexus ES.

For more information on the upcoming release of the Lexus ES, visit www.lexus.com, or visit your friends at Lexus of Sacramento today.